Standing in Line at Cinema Salem in Salem, Massachusetts, for the Opening Night of Salem Horror Fest, and the New England Premiere of Blumhouse’s Most Highly Anticipated Movie of the Year “Halloween”, the feeling I was getting standing in line was, 99% Excitement and 1% of worrying that something might go wrong, My Initial reaction was “Oh My God, I’m here, I can’t believe I’m here, I’m seeing this Movie 2 weeks before everyone else”. Standing in Line with My Bodyguard (yes i have a Bodyguard, being a podcaster you tend to have a few stalkers and enemies) the feeling of excitement of everyone in line was amped up to 11. I met a few people in line, one gentleman runs the projectors at the Mahoning Drive-In Theater, a Drive-In in Pennsylvania that does 35 MM film Double/Triple Features, also standing in line with us was an Employee of CinemaSalem who took the night off to see this epic film, we all were predicting what was going to happen in the film, fanboying, talking about 35 mm films, pretty much everything.

…….and we weren’t alone in Line

The Doors have opened, our tickets scanned, we Enter the theater, first thing we see is a big piece of paper in the foyer saying TURN OFF ALL CELLULAR PHONES DURING THE FILM, REFUSAL WILL RESULT IN EJECTION, or something along the lines of that, (We already knew that because we’ve been to Advanced Screenings before), So we get into the theater and take our seats, and it takes awhile for everyone to take their seats, while I take advantage of whats in front of me….. 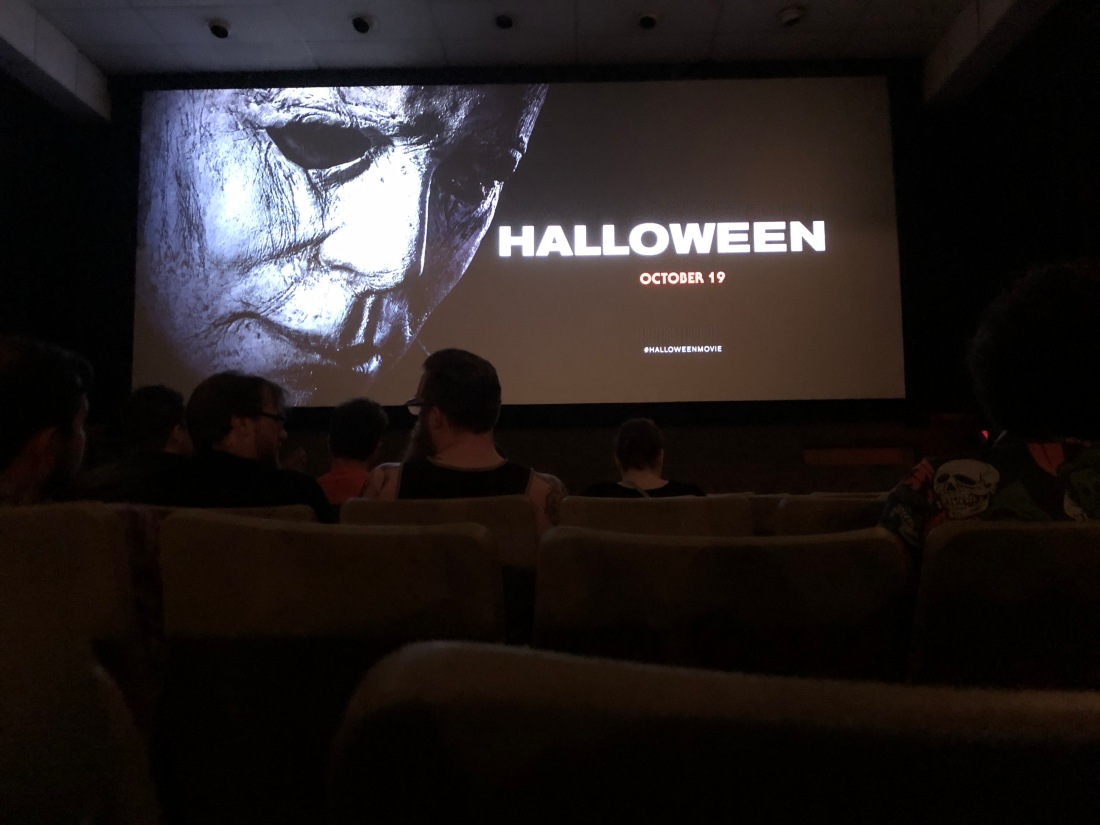 Everyone has taken their seats, and a lady has taken the stage, when we arrived at Salem 4 hours prior we met her at the Fangoria Booth, She is the Co-Host of a Podcast called CinemaSpection (although I can’t remember her name), Anyways she takes the stage and says the same thing on the paper in the foyer, and then introduces 2 Special Guests, The Vice President of Blumhouse Ryan Turek, and One of the Actresses from the New Halloween Movie: Andi Matichack. The Entire theater exploded with excitement, everyone wanted to pick their brains about the new film, but were hesitant because in about 4 and a half minutes they were going to see it right behind Turek and Matichack. 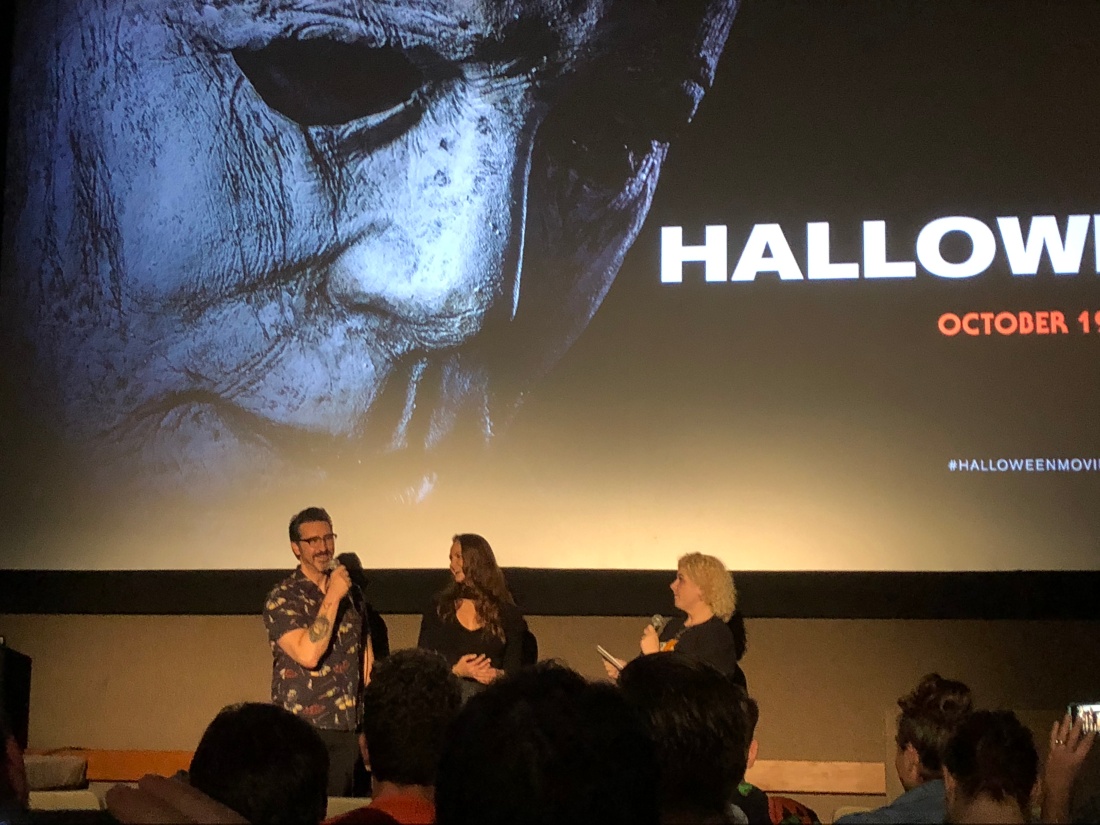 The Film Starts, and everyone was cheering, clapping, gasping, and just amazed at the hard work Blumhouse, David Gordon Green, and The Cast and Crew put together. We’re going to give you our (NO SPOILER) First Impression.

First Off, Holy Shit, what a freaking awesome film, It’s definitely something for the fan of the Franchise, Highly Recommended.

Seeing Jamie Lee Curtis return in her iconic role that elevated her into the stratosphere was a breath of fresh air, and trust me, you will be satisfied with her character. The Plot was (in grand Halloween Fashion what you’d expect, but with a few surprises) okay. There is something about the Mask that aged look, Something about it makes Michael look so menacing. Now lets talk about the man of the hour, Michael Audrey Myers, after 40 years, Pure Evil has never skipped a beat. The Deaths are freaking brutal, there is one that I really liked but I won’t say.

For our Review on Halloween check out Our Full Review, Which will be Available on October 19th on the Super Retro Throwback Reviews YouTube Channel

The Film Concludes with a 10 Minute (Thunderous Applause) Standing Ovation, It was definitely worth the 3 and a Half Hour Trip.

After the film, everyone filed out into the lobby where Andi Matichack and Ryan Turek were receiving Congratulatory Handshakes, and Photos with their Fans, I obviously couldn’t leave without Congratulating Andi Matichack on her portrayal as Allyson Strode (Granddaughter to Laurie Strode), So I shook her hand and said “Congratulations and Awesome Performance” she said “Thank You” and we got a picture together.

I said the same to Ryan Turek and got a Picture with him as well.

Heading Home, the feeling of seeing quite possibly one of the greatest Halloween films since the Original (you heard me). I was breaking down some moments from the film in my head and like i usually do after that, think how certain scenes could be played out differently. But It was a Night to Remember, A Night Where He Came Home To Salem!!

Check out Halloween when it slashes it’s way into theaters on October 19th.